Churches in Iceland are spread all over the country, from the popular south to the Westfjords or the cold north.

Icelandic churches are a stunning and instructive illustration of the evolution of architectural styles and materials. The oldest (and there aren’t many – maybe the fingers of one hand would be plenty for us) are built with traditional grass technology, which was developed by human settlements.

There are more than 350 churches in Iceland. For a country where only 330,000 people live, this is a high number and one may think that Icelanders are especially religious.

When Icelanders are born, they are immediately registered as Christians in the Lutheran Church of Iceland.

While 85% of Iceland’s population is reportedly Christian, the country is considered the world’s sixth most atheist nation.

Why are there so many churches in the countryside? In ancient times, there were no roads in Iceland and the harsh weather and deserted landscape made most roads difficult.

People generally did not want to travel far, not even to church. Instead, they decided to build smaller churches in more locations.

Our first church stop was at the famous Borg á Mrum farm, but like the waterfalls and lava fields, we stopped counting after a few days because there are so many.

The highly attractive church near Bir, the stone church ingeyrakirkja, the wooden church in Husavík, and others were all intriguing places to see.

There were also modern churches in Iceland, such as the Akureyrarkirkja in Akureyri, in addition to historical ones. The medieval farm Granjaarstaur is one of Iceland’s oldest, having been established near Glaumbaer approximately 900 AD.

This article will introduce you to some of them and show you some of the most beautiful churches in Iceland.

The most photographed church in Iceland is undoubtedly the majestic Hallgrímskirkja Church, which stands on top of Skólavörðuholt Hill in central Reykjavík.

However, there are a number of beautiful or unusual churches and chapels around Iceland, such as the unique timbered church on Vestmannaeyjar Islands, the small but modest Ábæjarkikja on Skagafjörður Island and the Hofskirkja Church.

Hallgrímskirkja is the tallest church in Iceland and is one of the tallest buildings in Reykjavík. The construction of this beautiful building took 41 years and was built to resemble the traps, rocks, mountains and glaciers of Iceland.

It would not be possible to write about Icelandic churches without mentioning Hallgrímskirkja, the largest church in Iceland.

It was designed by Iceland’s most famous architect, Guðjón Samúelsson, who is responsible for countless impressive buildings throughout Iceland, including the National Theater and Akureyri Church.

Hallgrímskirkja was named after a 17th-century poet and author of the nationally revered passion hymns (Passíusálmur), Hallgrímur Pétursson.

Its design is inspired by Icelandic nature, including aspects of glaciers, mountains and lava formations – especially the hexagonal basalt columns that occur behind the Svartifoss waterfall in the Skaftafell nature reserve.

The trumpet organ inside took a little longer to complete, until 1992, and consisted of more than 5,000 trumpets.

A symbol of Reykjavik, many herd to capture its beauty for themselves. It is possible to take the lift to the top of the tower and enjoy the panoramic views of the city, although you can expect to wait a while as it is quite popular.

From the church to the city is Skólavörustgur, one of the city’s four main retail streets. However, because of the high concentration of indigenous art and handicrafts, this is unique. This street will be a haven for anyone looking for handcrafted jewelry, paintings, ornaments, art photography, and apparel manufactured in local manufacturers. 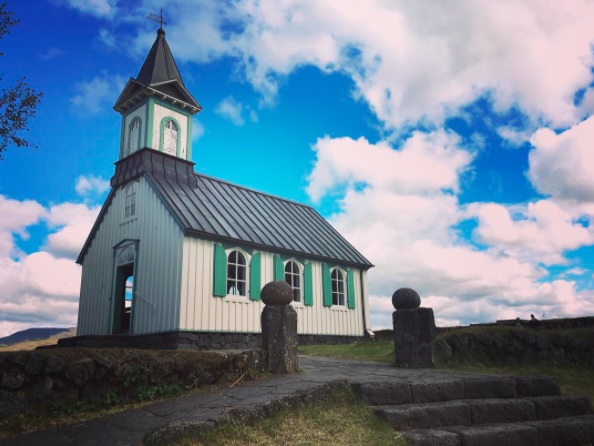 Thingvalla Kirkja is one of the oldest churches in Iceland. It was consecrated in the 11th century. Thingvalla Kirkja is easily accessible from Reykjavík, as it is located in the nearby Thingvellier National Park. This national park is home to the Icelandic Golden Circle, so if you are looking for another stop along the way, be sure to visit one of the oldest churches in Iceland!

Thingvalla Kirkja is accessible no matter what time of year you are in Iceland, both in winter and summer.

Kirkjubær in Hróarstung was a priesthood until 1956. The church was built in 1851, a large and stylish wooden church with a pulpit from the time of Bishop Guðbrand Þorláksson. The baptismal bowl is carved by the sculptor Richard Jónsson and the altarpiece dates from 1894. Artifacts protected by the church are also preserved in the National Museum.

Húsavík Church is a wooden church located in the center of Húsavík (architect Rögnvaldur Ólafsson) and has strong features of the so-called Swiss style.

The church was dedicated on June 2, 1907. The Húsavík Church is a cross church built of Norwegian wood.

The previous diocese is now the site of the cathedral. Originally, a massive wooden cathedral was constructed with cash collected from land sales.

It was here here that Iceland’s first school was founded. Only after the region was struck by a severe earthquake towards the end of the 18th century did the diocese’s prestige disappear. Skálholt was abandoned for a long time when the bishop relocated to Reykjavik.

Church in northern Iceland’s largest city – Akureyri. This structure, like the Hallgrimskirkja in Reykjavk, was designed by Gujón Samelsson. The central panels of the stained glass windows in the church originally came from the British Cathedral in Coventry.
The windows were astonishingly foresaw at the outset of World War II and sold to an Icelandic merchant who inadvertently located them at an antique shop in London before the cathedral was destroyed during the bombings in Britain.

In addition to the amazing panorama of the village and beyond, the first thing that appears when looking around the corner to Vík í Mýrdal is the beautiful white church of Reyniskirkja on the hill, which was built in 1929.

The journey to it, whether by car or on foot, is definitely worth it. The building itself is extremely photogenic, as are the views around it. It is possible to get married in this church if you mean an Icelandic wedding.

The Black Church of Budir has been a favorite photographic subject in recent years, and with good cause. The modest distinct church is a lovely and simplistic item set amid Iceland’s harsh nature, where the black hue contrasts beautifully with the often-cloudy mountains in the background, making it a cool spot for capturing images.

This church is very popular for photography and for tourists, so if you visit, make sure you take pictures and leave space for others who also visit the church and want to take pictures. If there is a wedding here, come back another time, because it means that the church is rented for a wedding reception.

Because most churches in Iceland are white with brilliant orange tiled roofs, Budir Church’s exterior décor is such a striking contrast. The surrounding environment is equally stunning, with the Atlantic Ocean to the south and the peninsula’s mountains to the north.

Although Grafarkirkja is the oldest church in Iceland, Strandarkirkja, a Lutheran church on the southern shore, is supposed to have been established in the 12th century. According to legend, lost Icelandic sailors promised to build a chapel wherever they docked if they made it safely to shore. Strandarkirkja is adjacent to Engilsvk (which translates to Angel’s Bay). The current church was constructed in 1888 and restructured in 1968 and 1996.

How many churches are in Iceland?

The significance of the church in Iceland astonished me greatly. Regardless of the population, a town will almost always have a church. And occasionally, even in the midst of nowhere, the only structure other than a farm house you see is a church, after traveling for miles and miles.

In Iceland, there are more than 350 churches. This is a large amount for a country of only 330,000 people, and it may lead some to believe that Icelanders are unusually devout. Icelanders are automatically registered as Christians in the Lutheran church of Iceland when they are born.

Are there christian churches in iceland?

Yes, there are many. Why?

In Iceland, Christianity has a lengthy history. Irish monks who lived as hermits in Iceland in the mid-eighth century were the island’s earliest residents. immigrants from Scandinavia arrived in the 9th century, bringing Norse paganism with them. Around the time of the founding of the Icelandic parliament (Althing) in AD 1000, Christianity was peacefully established in Iceland.

Why are there so many churches in Iceland?

Because of how difficult it is to travel even short distances in Iceland due to the severe climate and environment, there are many churches. In other areas, there are few or no good roads at all. As a result, several small churches have been built so that worshipers can safely attend Sunday services.