Waterfalls are definitely one of the main attractions and also the reason why tourists come to Iceland every year. Some of you probably know the photos of the most famous waterfalls, even if you may not know them by name.

Icelandic waterfalls are often seen in movies or series, such as the Game of Thrones series, in which you could see many other Icelandic locations in addition to the waterfalls.

Do you need 4×4 to get to these waterfalls?

The availability of many famous waterfalls in Iceland is often very easy, so you will not have to pay extra for more expensive 4×4 cars when renting a car.

Especially in the south of Iceland, some of the cheaper cars will be enough for you, whether it is a Hyundai i20, VW Golf or Kia Rio.

The positive news for tourists is that visiting almost all waterfalls is free, perhaps in addition to parking, which can sometimes be paid (an example is the Seljalandsfoss waterfall).

A selection of the 13 best waterfalls in Iceland 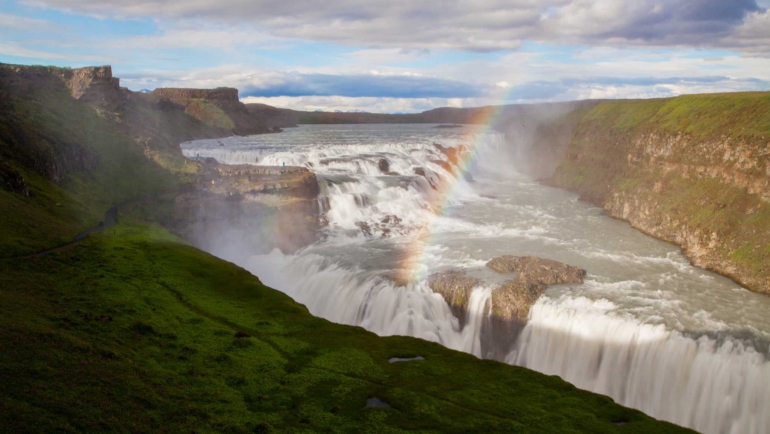 Gullfoss (Golden Waterfall) is one of the most famous waterfalls in Iceland. You will find it in the tourist area called the Golden circle and located near the famous icelandic geyser.

This waterfall looks breathtaking no matter what time of year you visit it. In addition, it is close to Reykjavik and the journey from the capital takes no more than an hour. 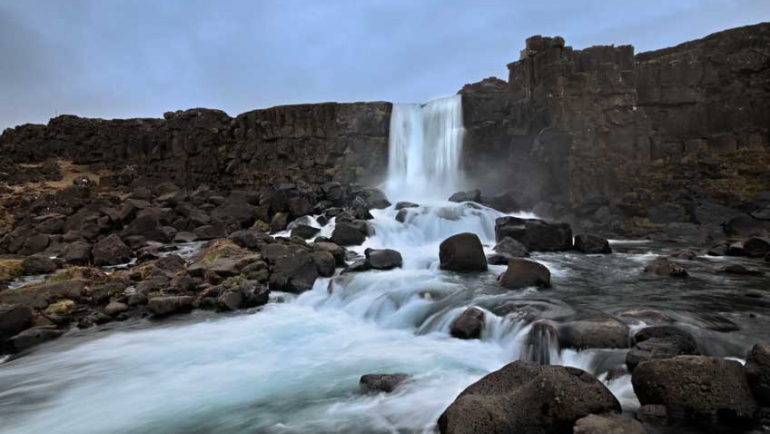 Oxararfoss Waterfall is probably in the itineraries of all tourists who are going to visit Thingvellir National Park.

The waterfall is about a 15-minute walk from the main car park in Thingvellir, and on the same trail you can find canyon trails that served as one of the locations in the aforementioned Game of Thrones series.

The very popular Selfjalandsfoss waterfall is located almost next to the main road N1, which runs around the whole of Iceland. The waterfall is a little more than two of the previous ones from Reykjavík, but you can manage to visit it during a day trip around Iceland.

Paid parking, toilets, a bistro and an Icelandic sweater shop are available on site.

About 500 meters from the waterfall, which you can bypass from behind is a hidden waterfall called Glufrábrui.

This waterfall, on the other hand, is hidden directly in the rock and on the way to it you have to wade through a smaller river. Both waterfalls are definitely worth a visit and should not be missed during your vacation in Iceland. 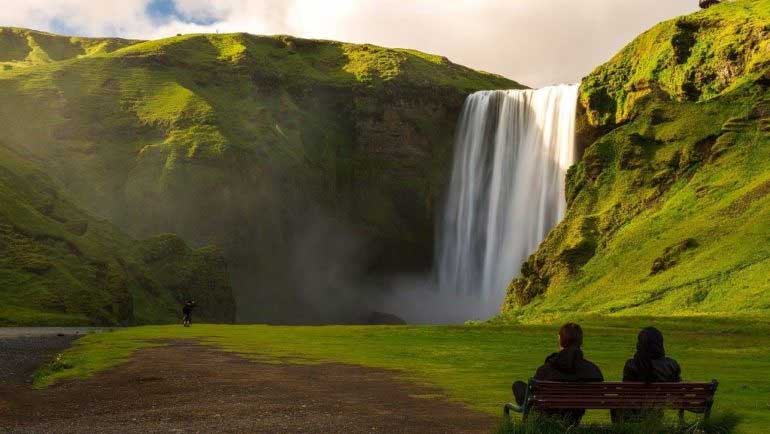 At the parking lot under the waterfall you will find a camp where you can stay overnight.

On the way to the waterfall you can then follow the path that will take you around the river, where you can see many other smaller waterfalls. 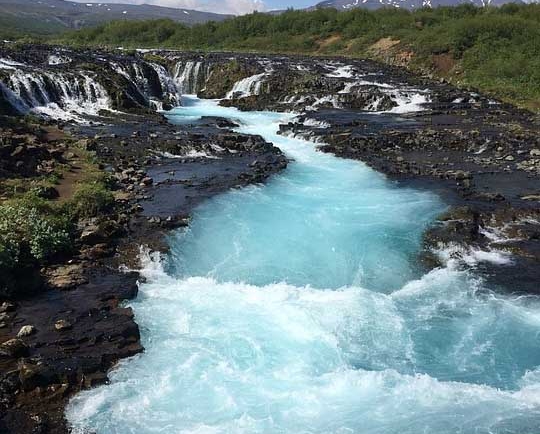 Bruarfoss waterfall is characterized by its bright almost turquoise color. Like Gullfoss, this waterfall is located in the Golden Ring area, so not far from the capital.

The way to the waterfall is a bit more complicated, but the bigger the reward is that it is less visited by tourists.

Svartifoss Waterfall is a little further east and you usually can’t reach it on the first day of your trip around Iceland.

Just like the Bruarfoss waterfall, you have to get here by a path that you have to walk for a few tens of minutes. The path is steeper, but the view of this unique waterfall is definitely worth it. 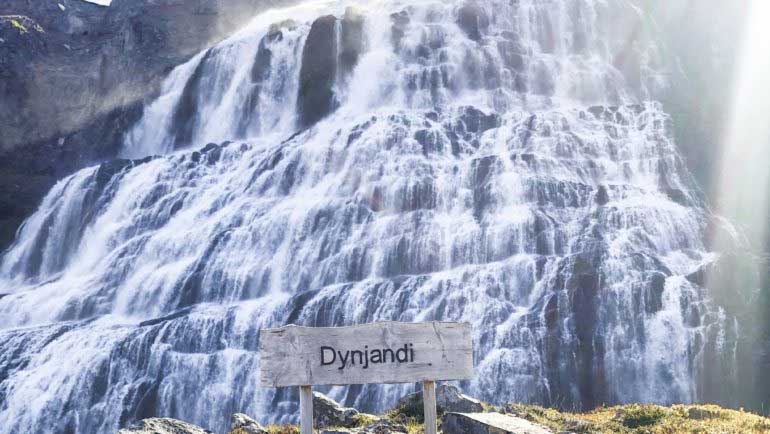 Those of you who would like to get to the top of this massive waterfall have to conquer about fifteen minutes.

The largest and widest part of the waterfall is the one that gets all the attention and photos, although they are impressive here, even though the smaller waterfalls fall down the river.

How to get to the waterfall?

If you have the opportunity to stay in Iceland enough days to visit the north-east of Iceland and the area around Mývaln, then you must definitely visit the Dettifoss waterfall.

It is one of the strongest waterfalls in Europe and if you stand next to it, it will definitely gain your respect.

Perhaps not so well-known, but definitely admirable Gufufoss waterfall, which you will find in the east, many hours away from Reykjavik.

The main difference between Gufufoss and Skogafoss is that it is remote and much less crowded.

Skogafoss usually has hundreds of visitors at the moment, but when I went there, Gufufoss was completely empty.

In Gufufoss it is also possible to go to the top of the cliff and take photos from there, but I was satisfied that I only took photos from the bottom by the river.

Haifoss Waterfall is one of the waterfalls where access by smaller cars is not easy or maybe not at all manageable.

A gravel road leads to the waterfall, where you climb to the top of the hill, from where you can enjoy the view and one of the highest waterfalls in Iceland.

The waterfall offers really beautiful views and for me personally is one of the best.

Hengifoss may be a bit like the previous waterfall, thanks to the typical reddish rocks. However, Hengifoss Waterfall is located in a completely different part of Iceland, in the Westfjords of western Iceland. The journey to the waterfall takes some time, but the reward will be an unforgettable view of the canyon.

We feel that Kvernufoss, a waterfall just a few steps from Skogafoss, deserves more attention.

It was one of the stops we couldn’t believe why it was so deserted.

On the one hand, you have overcrowded Seljalandsfoss and Skogafoss (but their popularity is absolutely justified) and only a few kilometers away is Kvernufoss, an equally beautiful waterfall waiting to be discovered.

We know that the south coast of Iceland is dotted with places to visit, so many passengers are in a hurry, but we really think it’s worth giving Kvernufoss a chance.

Godafoss or Waterfall of the Gods is one of the most magical waterfalls in Iceland. Godafoss lies between Lake Myvatn and Akureyri, just off the Ring Road, and is a place to visit.

This could be a brief description of the Godafoss waterfall, 12 meters high, 30 meters wide, the shape of a horseshoe and the beautiful water color of the glacial river Skjálfandafljót.

We know that this statement does not sound impressive, it is a bit boring and based on that you would not guess that Godafoss is one of the most beautiful and most visited waterfalls in Iceland. 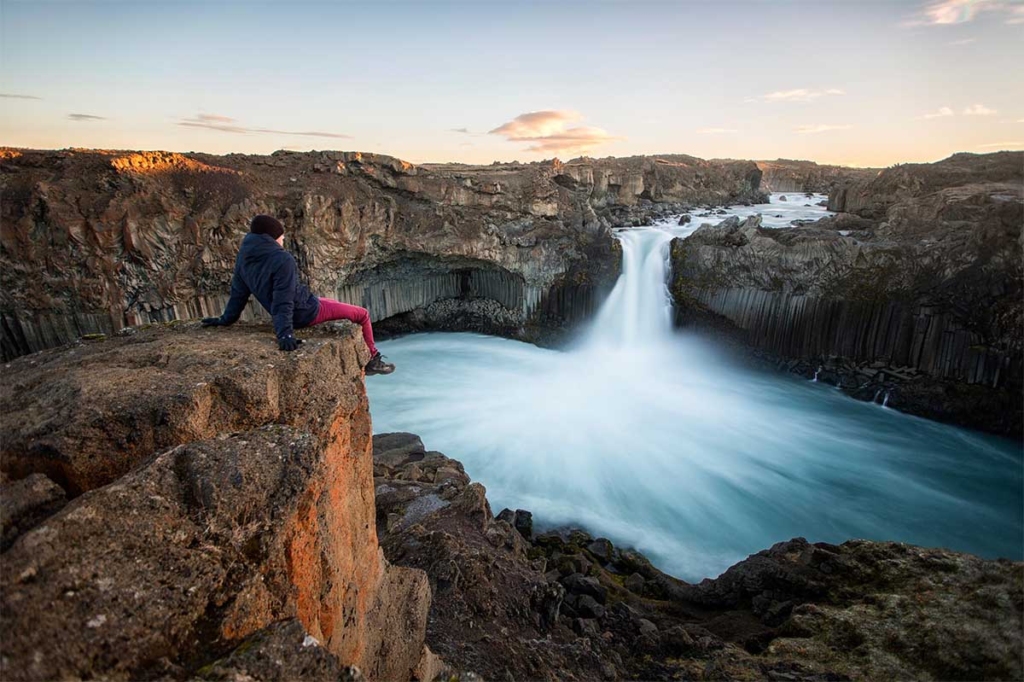 Probably the most beautiful in the north of Iceland is Aldeyjarfoss. The waterfall flows from the river Skjálfandafljót, right at the point where the drop is 65 feet long.

I consider it one of the most beautiful waterfalls in the north of Iceland due to the basalt columns.

Like Svartifoss Waterfall, Aldeyjarfoss is an exceptional contrast between black basalt and intense blue water.

Although absolutely stunning, it is not one of the most visited waterfalls in Iceland because it is far from tourist areas. Even so, I think it’s worth a little detour. 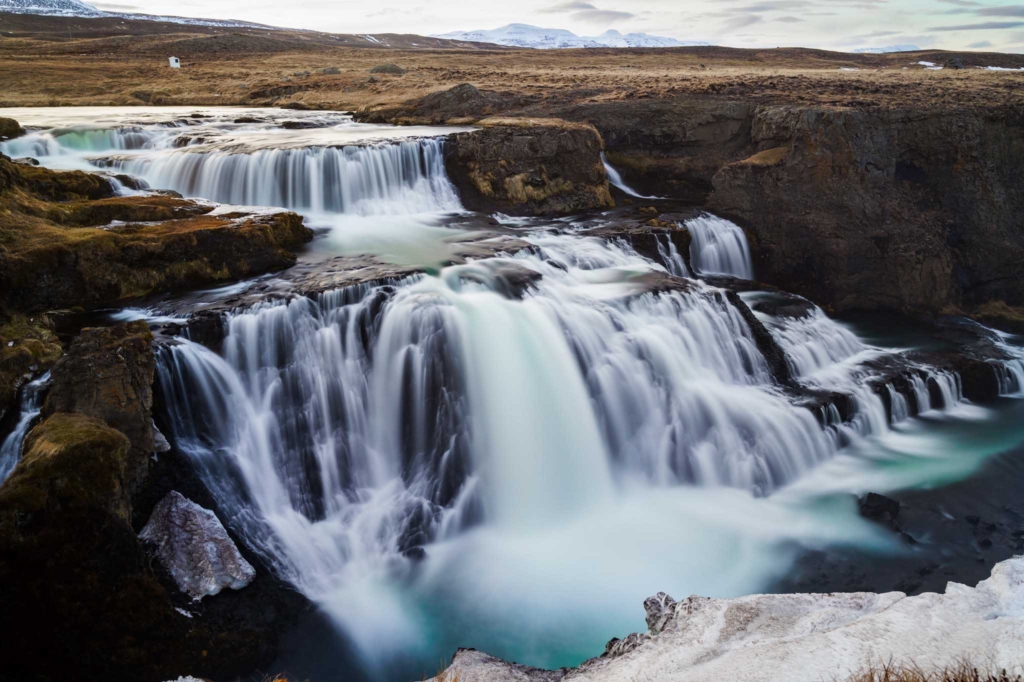 Reykjafoss Waterfall is one of the most amazing waterfalls I discovered during our last trip to Iceland. It is located in Skagafjörður, very close to Varmahlíð, and is one of the best hidden treasures in the country.

Reykjafoss is part of the river Huseyjarkvisl and in fact has two waterfalls. The first is quite small and the second is about 65 feet tall.

Sigoldufoss is a waterfall in Iceland, which almost no one visits, despite the fact that its blue water looks like a postcard. It reaches a height of over 30 feet and comes from the Tungnaá River.

Unfortunately, in 1981, a power plant was built very close to Sigoldufoss, which caused the erosion of the riverbed and waterfall. Nevertheless, Sigoldufoss is one of the island’s waterfalls to be seen near Reykjavik, which affects its tranquility and breathtaking blue water.

To get to this waterfall, you will need a 4×4 vehicle that can navigate the unpaved roads of the area.

If you are coming from Reykjavík, take the road to Hella and then turn left onto road 26. Then the road will change to F-26. Turn onto the F-208 and you will reach Sigoldufoss, as well as Sigöldugljufur.

One of my favorite things about Iceland is definitely bath in hot springs, so I’m glad to be...
Read More

Active geysers are a frequent reason to visit Iceland for many tourists. Because this island is full of...
Read More 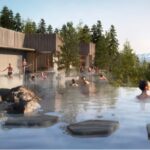 Caves of Hella
in
Activities