TOP 10 things to do in Hofsós

Find things to do in Hofsós – accommodations like hostel, guesthouse, and camping. So you can visit a museum or swimming pools and shop in a grocery store.

Hofsós is one of the oldest trading ports in northern Iceland dating back to the 16th century. The tiny village Hofsós in the Northern Region in Iceland was a rather busy trading post in the 17th and 18th century, but despite the merchant activities this small village did not develop into a larger village or a town in the 20th century.

Hofsós had all the historical prerequisites to become a large town. It was a trading post for the Danish Trade Monopoly, it was not far away from the fishing grounds, it was central in the region, and it had a relatively good landing spot for boats. The Drangey Exhibition is in Pakkhús, the Hofsós warehouse built in 1777, during the time of the trading monopoly.

Massacre hill farm (Mannskaðaholl) at the south end of Lake Höfðavatn, is named for the massacre of English marauders, which took place there in 1431. Other services offered are accommodation in guesthouses, a restaurant, coffee-house, and a camping site. There are also pleasant walks along the shore with good examples of hexagonal basalt columns.

Thorðarhöfði headland rises like an island some distance from the main shore. It is connected to land by low sandpits impounding a considerable lake with rich bird life and good trout fishing.

A complete list of cafés, restaurants, and buffets. Find out where to stop to eat during your road trip along Iceland.

A complete list of hotels, guesthouses, and cottages in this town. Find out where to stay during your road trip along Hofsos.

Best things to do in Hofsós

A complete list of waterfalls, tours, and other attractions. Find out what to do during your road trip along north Iceland.

A complete list of grocery stores, liquor stores, gas stations and supermarkets in Hofsós . Find out where to shop during your road trip along north part of Iceland.

What to Do in Hofsós? A tiny & charming village in North West Iceland 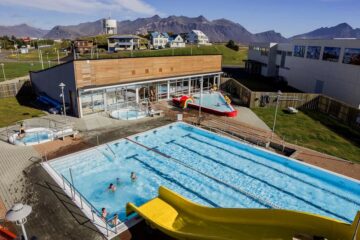